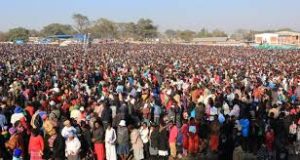 "Go ye into all the world, and preach the gospel to every creature. He that believeth and is baptized shall be saved; but he that believeth not shall be damned. And these signs shall follow them that believe; In my name shall they cast out devils; they shall speak with new tongues; They shall take up serpents; and if they drink any deadly thing, it shall not hurt them; they shall lay hands on the sick, and they shall recover. So then after the Lord had spoken unto them, he was received up into heaven, and sat on the right hand of God. And they went forth, and preached every where, the Lord working with them, and confirming the word with signs following. Amen."
(Mark 16:15-20) 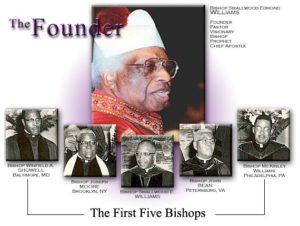 This Conference was led by Drs. Smallwood E. Williams, John S. Beane, McKinley Williams, Winfield Showell, James I. Clarke, Elder Joseph Moore and others, some of which were former officers of the Church of Our Lord Jesus Christ of the Apostolic Faith. This conference was convened to consider some mal-administrative practices which were found to be out of line with the New Testament collective leadership as practiced by the Apostles, and the authoritarianism which could no longer be tolerated.

From this Conference, Dr. S.E. Williams was consecrated as Bishop and Presiding Bishop of the newly formed organization and four outstanding Pastors were consecrated to the Bishopric, namely, Dr. John S. Beane of Petersburg, VA, Dr. McKinley Williams of Philadelphia, PA, Dr. Winfield A. Showell, Baltimore, MD and Elder Joseph Moore of Brooklyn, NY. Bishop John S. Holly of the Pentecostal Assemblies of the World was the officiant at the ceremonies.

The authenticity and orthodoxy of the Bible Way Church of Our Lord Jesus Christ World-Wide can be attested as to its validity historically, experimentally and doctrinally. Historically, its spiritual roots go back to the 1st century AD 30, in the upper room at Jerusalem on the day of Pentecost, about 9am; the third hour of the memorable feast of Pentecost, the birthday of the Christian Church.

Bishop Smallwood E Williams is revered by this august body as one of the greatest leaders of the 20th century He was a modern day Apostle without equal. He was a preacher and an orator of the first magnitude. He was a man before his time, at the vanguard and on the cutting edge of the civil rights movement of the sixties and seventies. He was known as a bridge builder and a role model for men of all ages in Christian ministry. During the 34 years of his presidership he almost single-handedly put Bible Way World-Wide on the map of all Christendom. This brief paragraph cannot contain all of the wonderful works done by this mighty man of God. However, it must be stated here that each of the first five Bishops mentioned in this history made their own unique contributions to the success of our great church.